The Chronicles of the Robin Witch 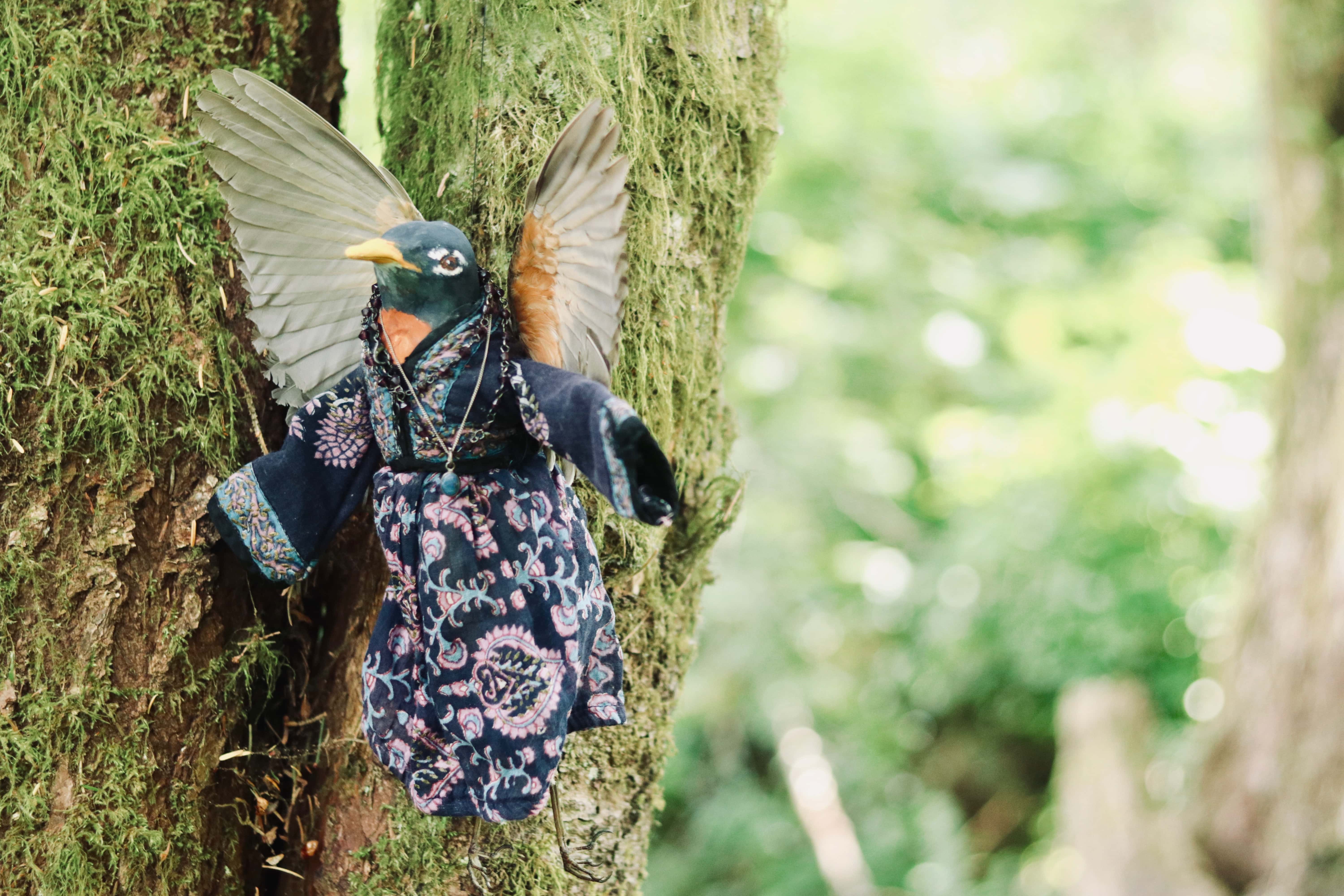 I live in secret meadow surrounded by trees.

The branches pull me into their being.

I sleep with my windows open.

The wild air blows into my dreams.

I light a cooking fire,

I love the earth, and she loves me

I tend the soil and plant her seeds

I gather food and herbs and fire wood

This is our sacred exchange

I want to tell stories about all that I love

and all I have learned

I was born again as a witch

A robin witch; a good witch

That which is connected to the earth

You see, there are these speckles in my eyes, 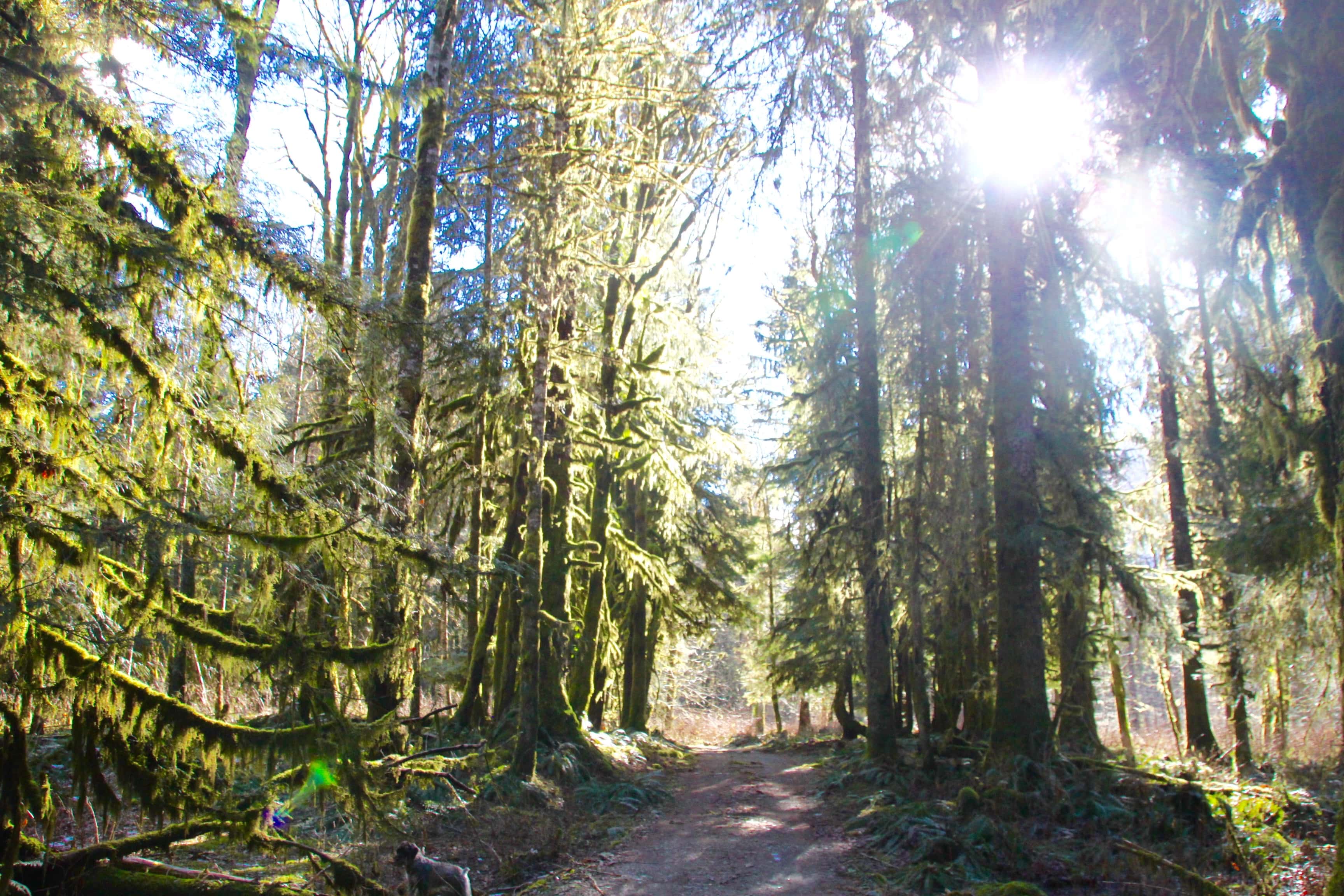 Sometimes with a birth of a being, there is a breaking; a complete shattering ,so that all the fibers of that being are released or rearranged, and set free. And so it was with this being. 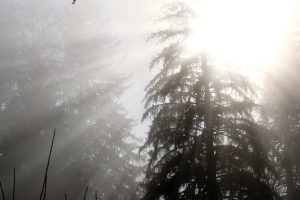 Her first incarnation was as a child of intense wonder and imagination. She played alone in her own world; dolls, elves, fairylands. She preferred the wilderness of her imagination to all other realms, and spent most of her time there. And as it happens as children grow older, her precious world began to shrink. The strands that held her, connected her to home slowly weakened as she worked and behaved and assimilated her desires into the collective expectation. Though this disconnection filled her with desolate grief, her dreams held strong to the last remaining strands and on the deepest nights she visited that wild and visceral place of true home. It was never and always the same, and upon awakening her longing to return consumed her. So she put a sacred wish out to the universe, a prayer in her bones.

In time, the universe heard her prayer and responded in the most unexpected way; a way that still hurts to think back on, a way that challenged her spirit, shook her up and flung her way up into the clouds, spinning her so fast she couldn’t remember her own dream and she forgot who she was. It was a way of death and rebirth and brokenness and truth. It came as a storm of heartbreak, illusion, unrequited love;  a hurricane of emotional betrayal, a catalyst that exposed her, tricked her, and dissolved her sense of security. It was a long and drawn out agony that rendered her so distorted and small that she no longer resembled a woman at all. But so it was.  And as her prayer’s answer took this traumatic shape, her eyes swallowed the light of the earth and moon and stars, and despite the unbearable pain of it all, she completely surrendered everything she had. And then everything went black. 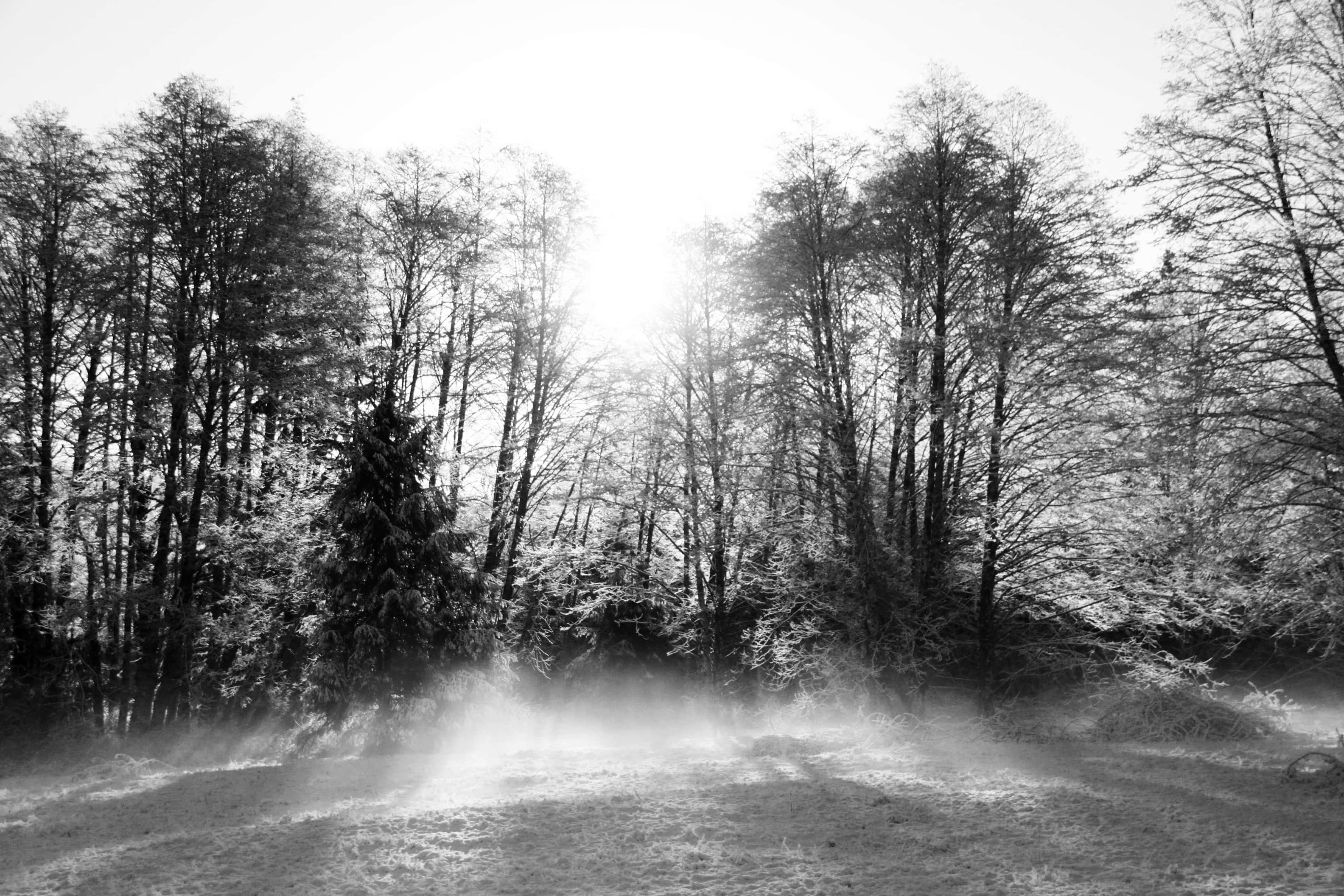 When she was able to see again she caught the shadow figure of a man walking away, and she discovered that she had been taken to the woods and left there for dead. As she looked around she noticed mountain and river, spruce and alder, clover and ferns, swamp and moss. There was elk and raven, eagle and bear. She was in a secret river valley meadow, with acres and acres of forest all around. Although there was something familiar about this place, she felt as deeply lost as she had ever been. She felt so alone and cold, and in her head and in her heart she couldn’t see straight, she couldn’t discern beauty, couldn’t find her dreams. She couldn’t find a way past her raw and painful wounds and loneliness. 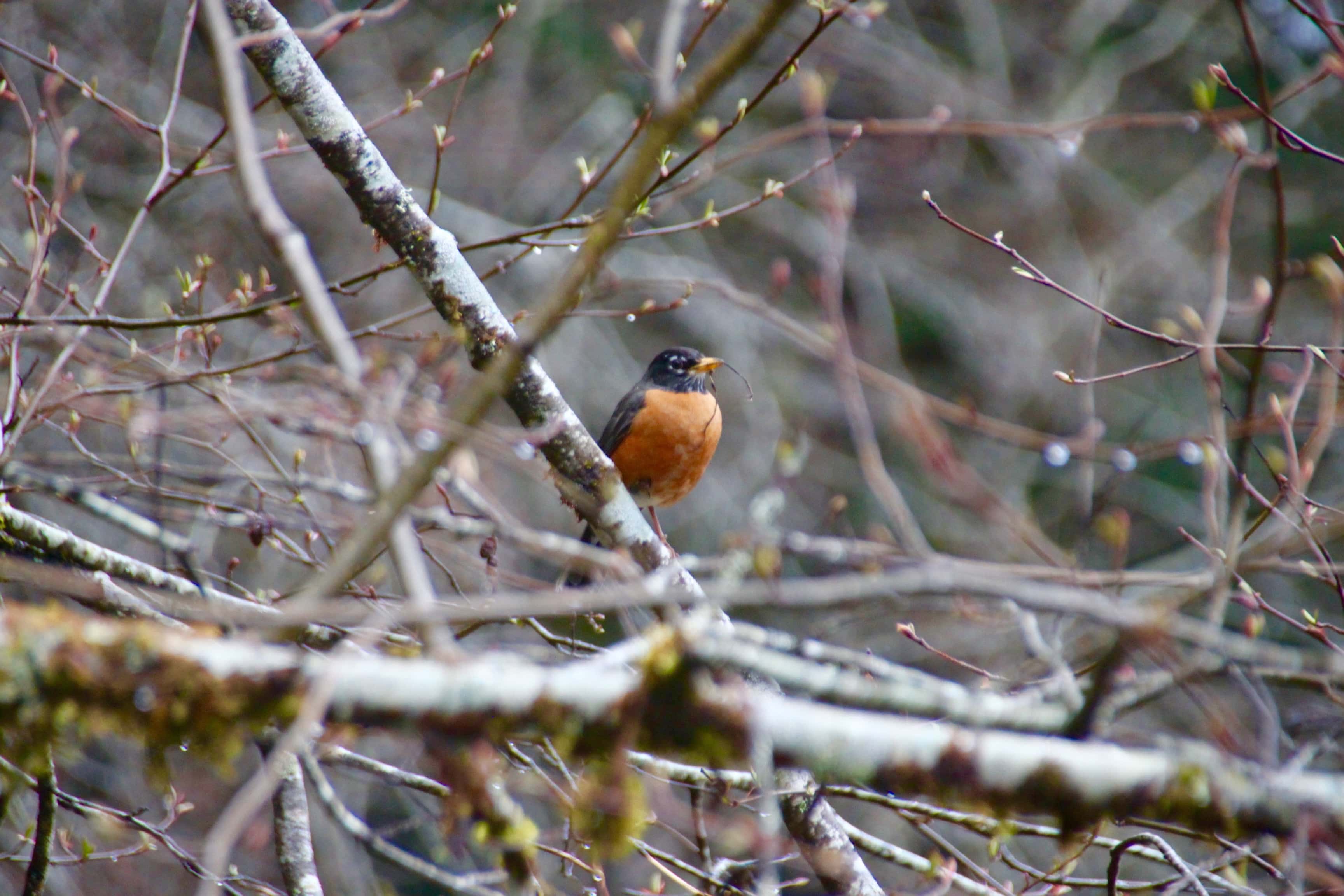 Little did she know that someone was watching her. From the alder and cascara branches, the old fence posts and the newly turned earth, the rotting stumps and grassy meadow, the robins were witnessing everything. With dark eyes like ancient pools circled by a bright white ring, the robins saw her with great clarity and wisdom. They understood that the woman needed something only they could teach. They knew that endings were in fact beginnings, and this was the time for her renewal. The robins sensed her desire to feel the simple joys again, saw her buried dream in the dim of her eyes, and they collectively decided to become her guides.

Mother Robin took her in, tucked her securely into the fold of her wing, and encased her essence in a protective shell, a bright and hopeful shade of blue. She was placed in a nest woven of all the elements of the meadow and forest, and held within the comfort of a deep deep softness and peace. And from inside this little egg, with the warmth and tenderness of Mother Robin’s love, she was soon reborn. 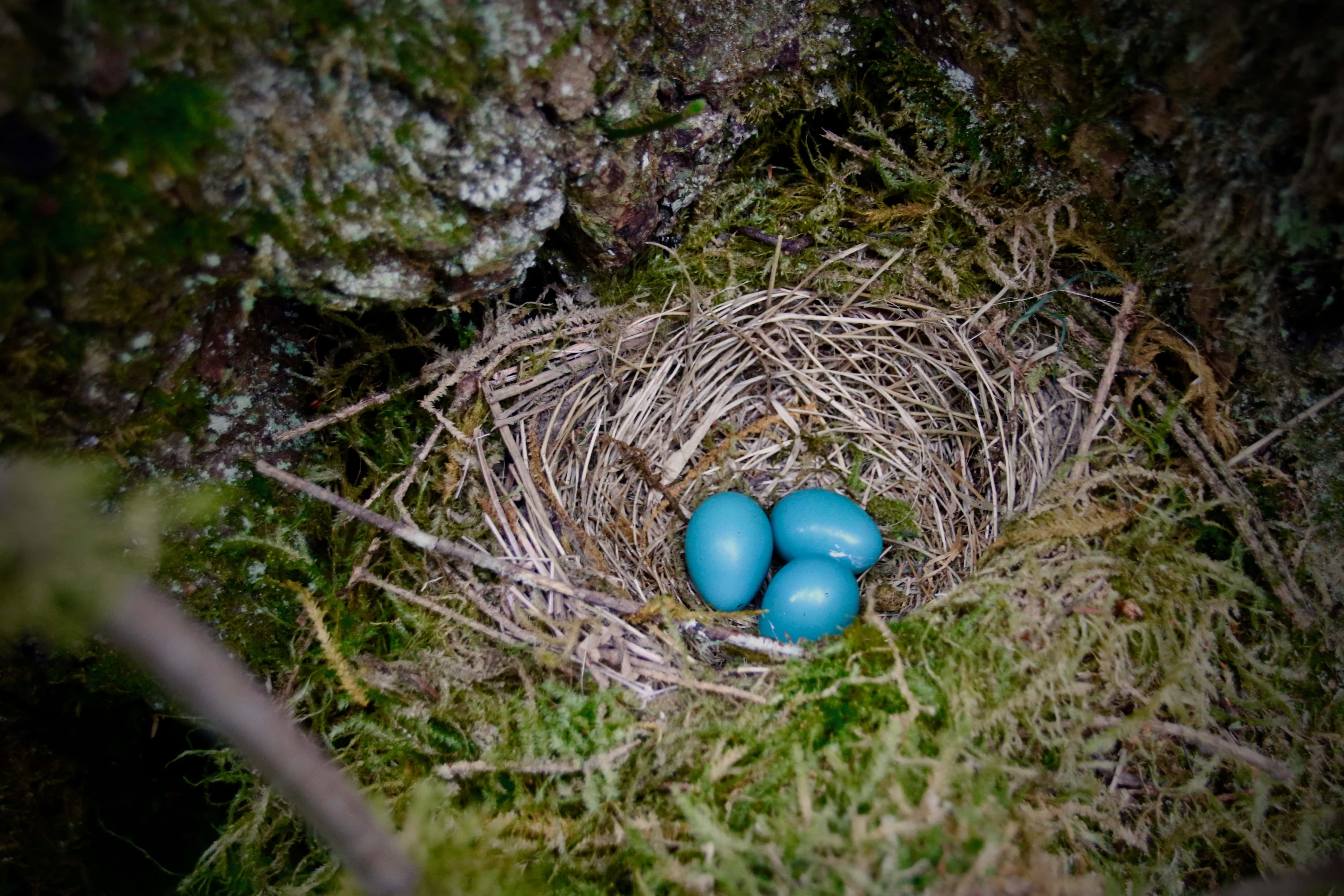 With a warm and gentle cracking, and opening of light, and guidance from Mother Robin, she had grown the ability to speak from her heart, see clearly into herself, find her voice again, express her truth, and heal the pains of her past. A light-heartedness had replaced her anxiousness, and hope coloured the core of her thoughts and feelings. It was the very first spring of her new life. 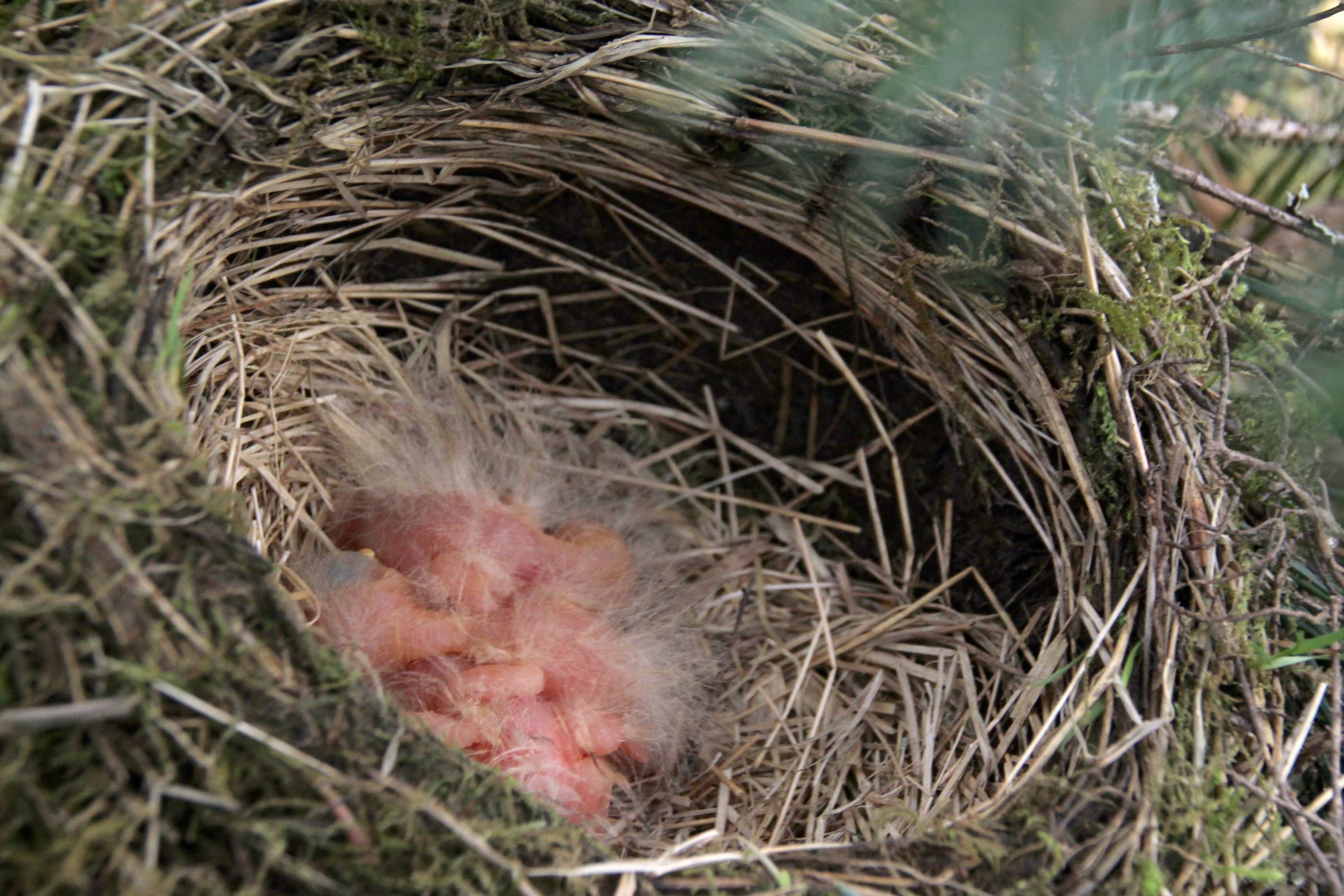 The meadow nest was a place of many teachings and lessons. Mother Robin spoke often of abundance and love and faith. She taught many songs of joy and gratitude. Dandelions bloomed into galaxies below, and the night was lit by the same stars above. She was given the love and nurturing she had lost, and so needed. When it was time, Mother Robin encouraged her fledgling to take flight and realize her oneness with the air and the earth. To let go of childhood grief, and to open her wings into her very own wholeness. She was home, she was remembered. 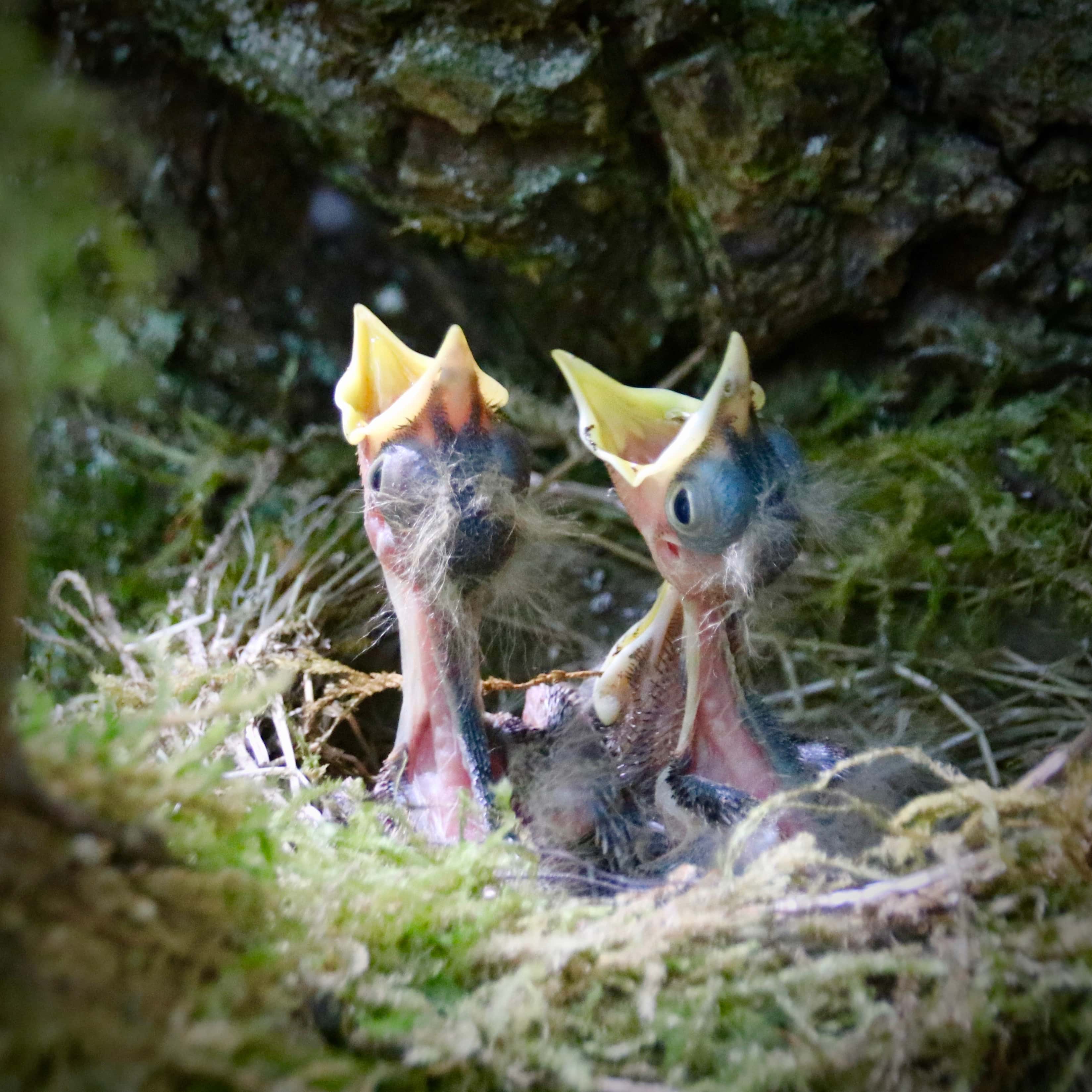 And as she opened into her true self and saw that she was completely at home in that ethereal dream she had so missed, she understood the value of patience. All that she had endured through her transformation she could now look on with compassion and reverence. Her heart was calm, her vision clear. There was a sparkle of magic inside her now, and she was forever changed. 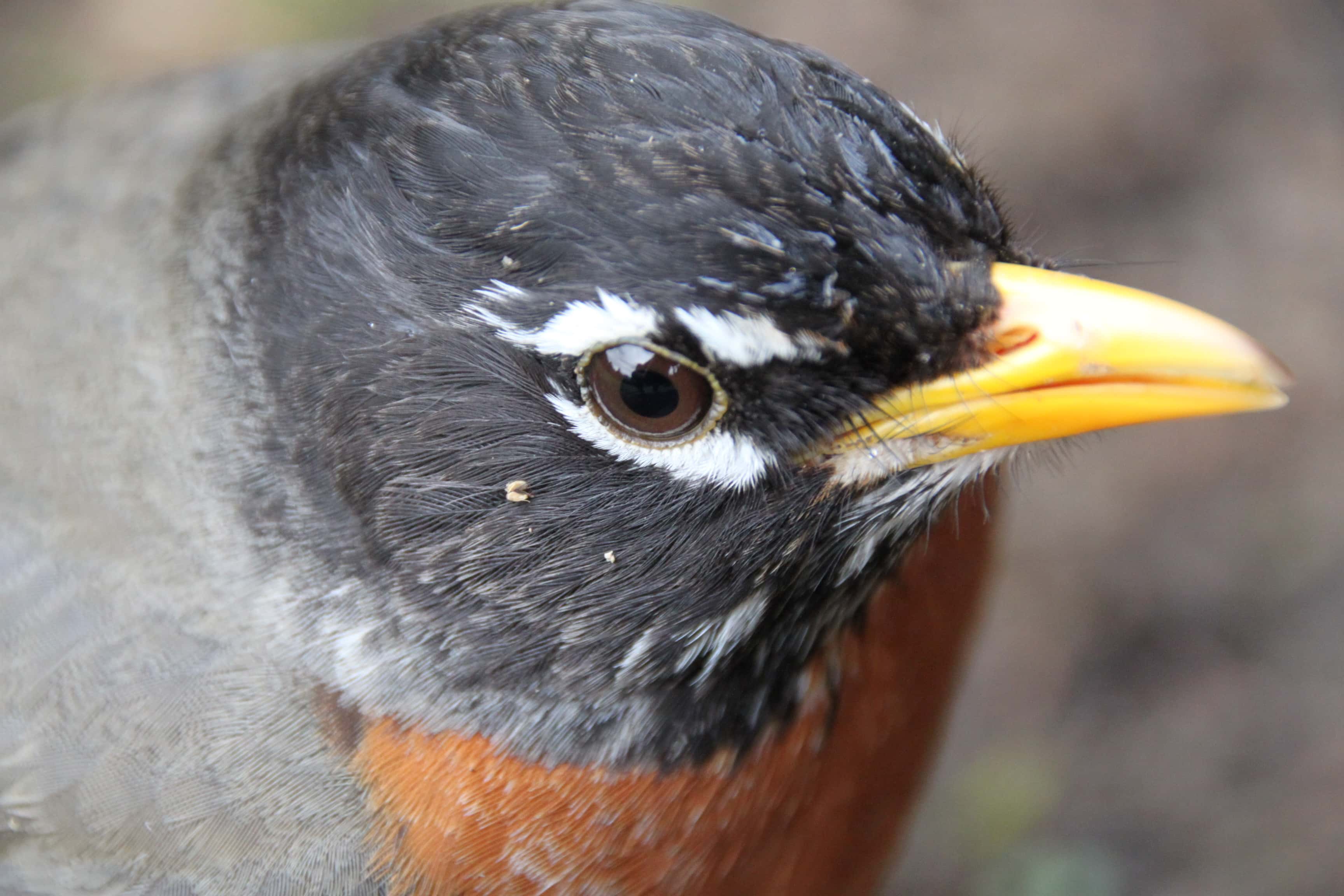 “This is the Robin Witch,” Mother Robin announced to all the creatures of the forest and meadow in the morning chorus. “She is one with the forest that feeds us, and the land that depends on our love. The earth and moon and stars are there, in her eyes. She is a seer of truth, beholder of wisdom and light. She is ours as we are hers.”

And then in a softer voice meant only for her, Mother Robin turned to her and said, “Your eyes shine differently now, you see. Your life will no longer be ordinary.” And as she watched Mother Robin fly up into the trees, the Robin Witch felt her feet plant firmly into the ground, invisibly rooting to the precious earth below. 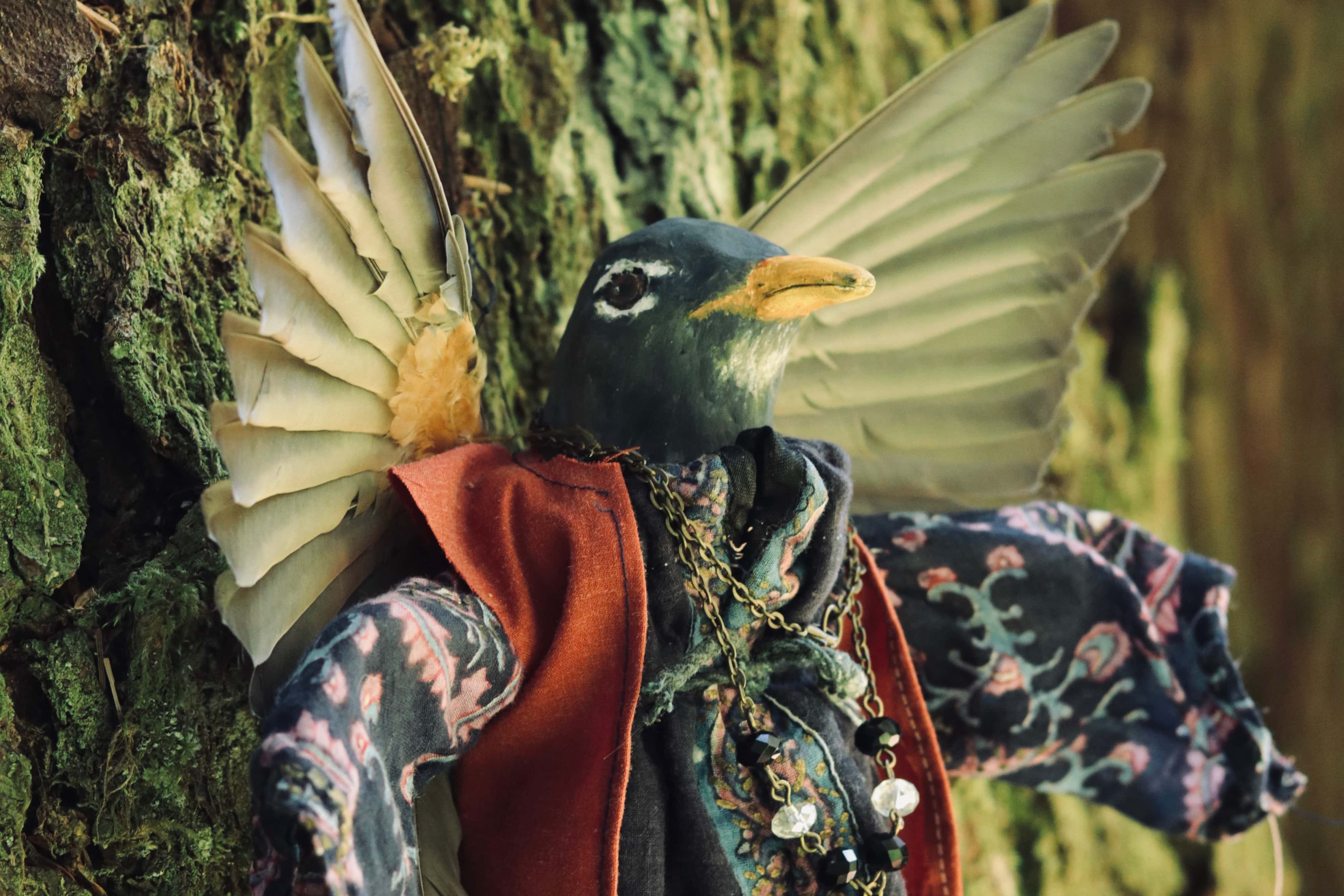 And so, the young Robin Witch made her home there, a cabin in the trees, a medicine garden in the sun, and claimed her life like she never had before. In doing this, she attracted the very things she needed. One of these things was a handsome woodsman who knew how to hold her heart tight, but in just the right way that made her feel more wild and free than if she were alone.  The Robin Witch had such a big and tender heart, and to let in rest in the arms of another was a beautiful relief. With the woodsman by her side, her magic grew even stronger.

As she walked the woods around her cabin, she began to notice and identify all the plants and flowers she met. Before long, she was communing with each of them for they quickly became her dearest friends. The first stars of springtime reflected as speckles in her eyes; the fawn lilies, dandelions, and salmonberry blooms. She inhaled the deliciously soft sweetness of bracken fern and nootka rose, the sharp peppery scent of cottonwood, and the crisp citrus green of cedar and spruce, bonding her to them, and to the earth. Summer brought her sweetness in berries, friendships with toads and choirs of songbirds in the early dawn.  Autumn provided the earthy nourishment of mushrooms and roots, rosehips and rain. The trees turning gold, and the mist creeping in led her to winter, when she huddled up in her cabin wrapped in the arms of her woodsman, and her Mother Robin whispering through her dreams reminders of all the gifts she has been given, and all she has given to this land in return…. 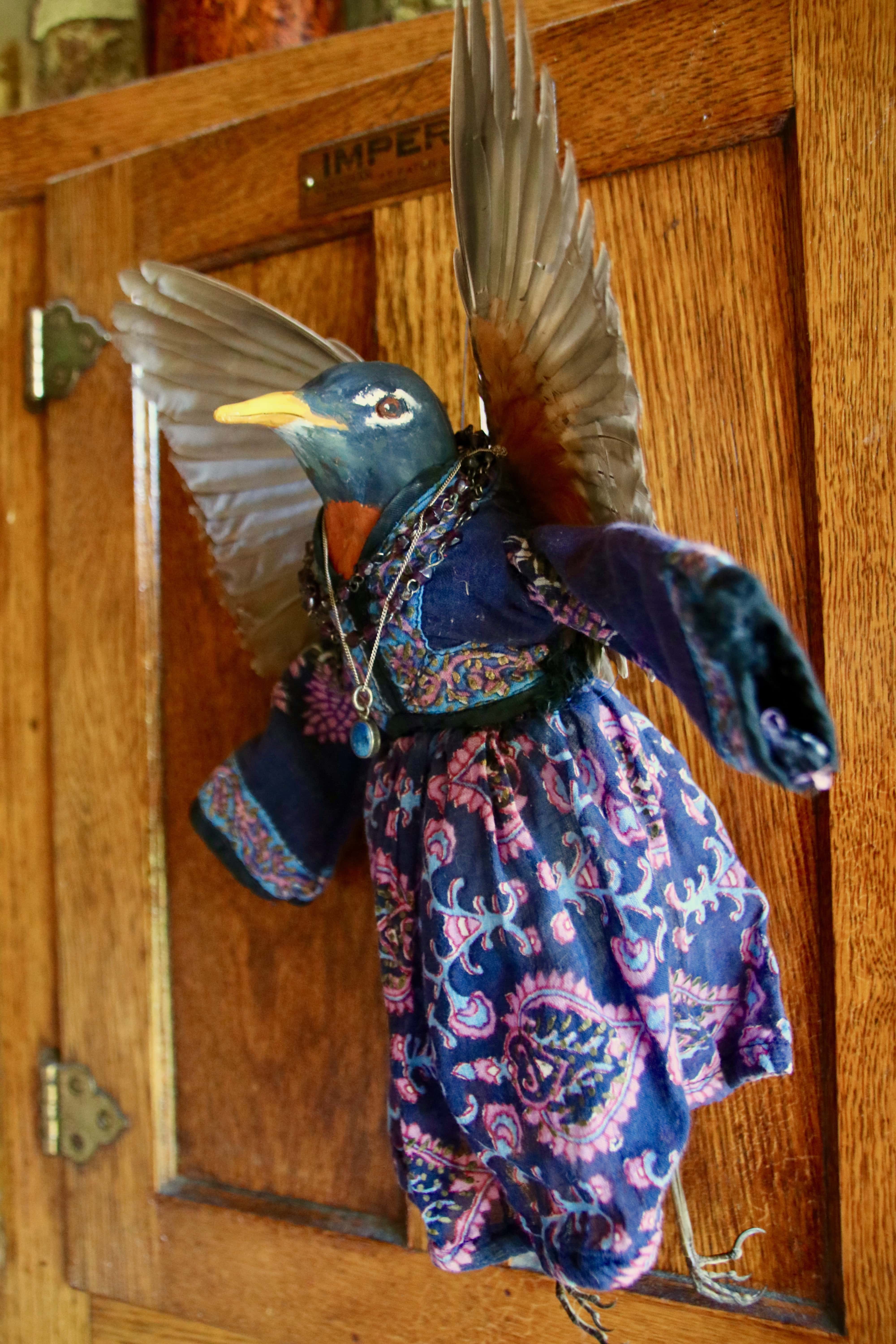 3 Comments on “The Chronicles of the Robin Witch”